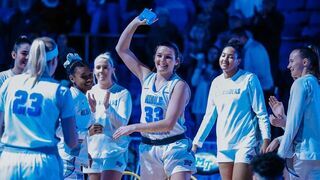 MURFREESBORO, Tenn. – Courtney Whitson has been named the Conference USA Scholar Athlete of the Year for women's basketball as announced by the league office Monday.

The award, voted on by the conference's Faculty Athletic Representatives, are presented to the top student-athletes in each conference-sponsored sport based on academic achievement, athletic achievement, and service.

Whitson boasts a 3.71 GPA with a major in English and minor in secondary education. She was named to the five-person C-USA All-Academic team in March, and she was the C-USA Spirit of Service Award winner for Middle Tennessee last winter. Whitson was the recipient of the Dr. Pepper/College Football Playoff Foundation Tuition Scholarship in the fall, and she is a two-time recipient of the C-USA Commissioner's Academic Medal. The well-rounded Whitson is also heavily involved in the Fellowship of Christian Athletes.

The rising senior forward enjoyed a banner year on the basketball court, helping lead Middle Tennessee to 27 wins and the semifinals of the WNIT. She was named to the All C-USA women's basketball team in March.

Whitson substantially increased her production in every statistical category during her junior campaign when she averaged 12.4 points and a team-best 7.3 rebounds per game. She scored in every game, including 22 double-figure scoring games.

Whitson finished the season among C-USA leaders for minutes per game, 3-point field goals per game, rebounding and defensive rebounding.