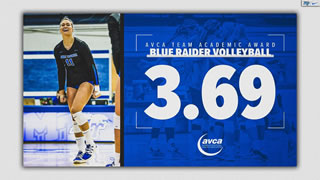 Murfreesboro, Tenn. – The Middle Tennessee women's volleyball team is one of 1,275 collegiate and high school teams nationally that have earned the United State Marine Corps (USMC) and the American Volleyball Coaches Association (AVCA) Team Academic Award for the 2020-21 season. The honor is awarded to teams that maintain a grade-point-average of 3.30 or better for the entire academic year.

The Blue Raiders posted a 3.69 GPA across 2020-21 to claim their fourth consecutive AVCA Team Academic Award. The Middle Tennessee women's volleyball team also ranked in the top 20 percent of Division I women's programs who received the honor.

"Even though teams might not have played during their usual season or may not have competed at all during the past year, coaches still found ways to lead their players to academic excellence." said AVCA Executive Director Kathy DeBoer. "This is a testament to the important role volleyball coaches play in their players success both on and off the court."

The Blue Raiders will face Austin Peay in an exhibition match on Thursday, Aug. 19 at 1 p.m. before opening the season in Jacksonville, Alabama against Alabama State.