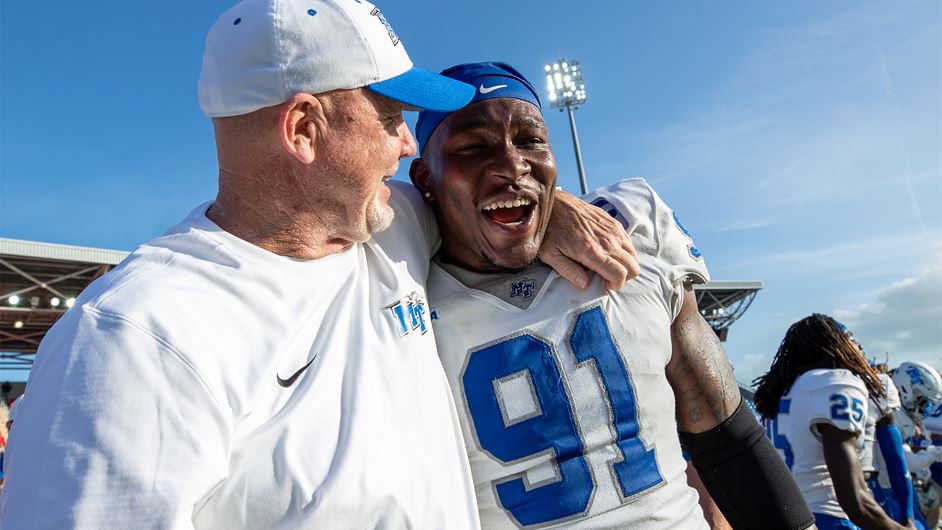 MURFREESBORO – Allstate and the American Football Coaches Association (AFCA) announced today nominees for the 2022 Allstate AFCA Good Works Team®. Blue Raider defensive end Jordan Ferguson was among 114 student-athletes from across all divisions to be nominated.

In 2021, Ferguson successfully launched his first official non-profit organization called Hands Worldwide. With some help, his first event was handing out hot plates of food and water to those in need on the streets of Atlanta during the winter holidays. Later in the winter, he handed out blankets to the homeless in Nashville and Murfreesboro. This is just a small sampling of what he does on a consistent basis. That selfless devotion to not only his teammates, but also the community at large, continues to make the difference in the lives of so many people.

Ferguson, who has been on everyone's C-USA preseason first team this summer, is coming off an incredible season on and off the field. Ferguson ended 2021 with new career marks in tackles (58), tackles for loss (16.5), sacks (9.0), hurries (14), forced fumbles (3) and fumble recoveries (2). The second team all-conference pick ranked 22nd nationally in tackles for loss.

"While these players are tremendous athletes on the field, they are even better people off of it. They realize that giving back is one of the most important things you can do in your life, and I am inspired by how they have used their opportunities to make life better for those around them," said Tim Tebow, two-time national champion, Heisman Trophy winner and 2009 Allstate AFCA Good Works Team member. "The impact they make will go well beyond their football careers. These men represent the true heart of our sport."

A Panel Chooses the Team

The final 22-member team and honorary coach are selected by a voting panel of former Allstate AFCA Good Works Team members and journalists. They look for exceptional leadership on and off the football field.

After the final team members are announced in September, fans can vote for this year's Allstate AFCA Good Works Team captain through the official page on ESPN.com. Fans can join the conversation on social media with #GoodWorksTeam throughout the season.

"These players embody the best of what college football stands for: character, selflessness and the willingness to serve and give to others," AFCA Executive Director Todd Berry said. "The AFCA proudly stands alongside Allstate and each of these players' families and communities to applaud their inspirational work off the field."