As the rate of Latino immigrants increased heavily in the United States in the 1970s, Latina women eagerly sought to establish themselves in the academic, social, political, and career world. Lambda Theta Alpha Latin Sorority, Incorporated was established to quench the Latina woman's need for a support system, for at the time, the number of Latinas in higher education was much lower than it is today. The purpose of the organization was to cater to the needs of not only the Latina woman, but the universal woman as well. With the help of this support system, the universal woman would achieve her highest potential and successfully accomplish her goals. 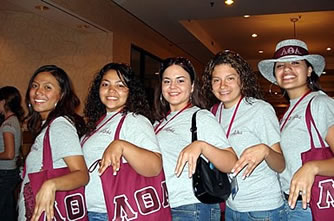 In December 1975, seventeen founding mothers united together for change and established Lambda Theta Alpha Latin Sorority, Inc. These visionaries were:

Together, these seventeen founding mothers catalyzed the empowerment of the Latina and universal woman through the principles of unity, love, and respect. Furthermore, Lambda Theta Alpha, which was founded as an academic sorority, strongly emphasized scholarly excellence as well as cultural and political awareness and community activism. With such emphasis on academics, community awareness, and diversity, the organization became an ideal organization for generations of ladies to come. On April 30, 2006, five sisters officially founded the Delta Iota Chapter of Lambda Theta Alpha Latin Sorority, Incorporated on MTSU's campus.