English and The Pecks

Drs. Richard C. and Virginia Peck influenced the English Department by their many years of work, leadership, service, and gifts. "The Pecks" came to the department in the 1940's from Vanderbilt University, where they met, courted, married, and earned their degrees. Virginia Peck, a professor who taught courses ranging from Anglo-Saxon literature to Modern Poetry, was known for her excellent scholarship, and she became the first faculty member to receive an MTSU research grant. She was an excellent swimmer, and she was known internationally for hybridizing tetraploid Hemerocallis daylilies. She taught in the department from 1949 until 1977, the year of her retirement. Dr. Richard Peck became the Chair of the Languages Department upon his arrival to Middle Tennessee State College in 1946. During his service, he hired numerous faculty members, thereby increasing the number of departmental faculty from five members in 1946 to thirty-nine faculty in 1973, the year that he died from cancer.

During the Pecks' many years in the department, they received many faculty visitors in their home, which was a lovely farmhouse built around an old log cabin. They later added a large laboratory in which Virginia Peck developed her daylilies, many of them named for Arthurian knights.

The Pecks' legacy also derived from their monetary gifts to the department. They bequeathed the Richard C. and Virginia Peck Scholarship Fund , which continues to provide numerous scholarships to our outstanding undergraduate majors and graduate students, and the Virginia Peck Fund, which has funded numerous speakers' presentations, projects, and programs for our faculty, students, and the university. These gifts, were the largest amounts of funding given by a private source to any department in the university. The "New Classroom Building" was renamed Peck Hall in their honor. The love and respect for Richard and Virginia Peck is still spoken of by members of the department who knew them well and by those who know them now by their service and gifts. 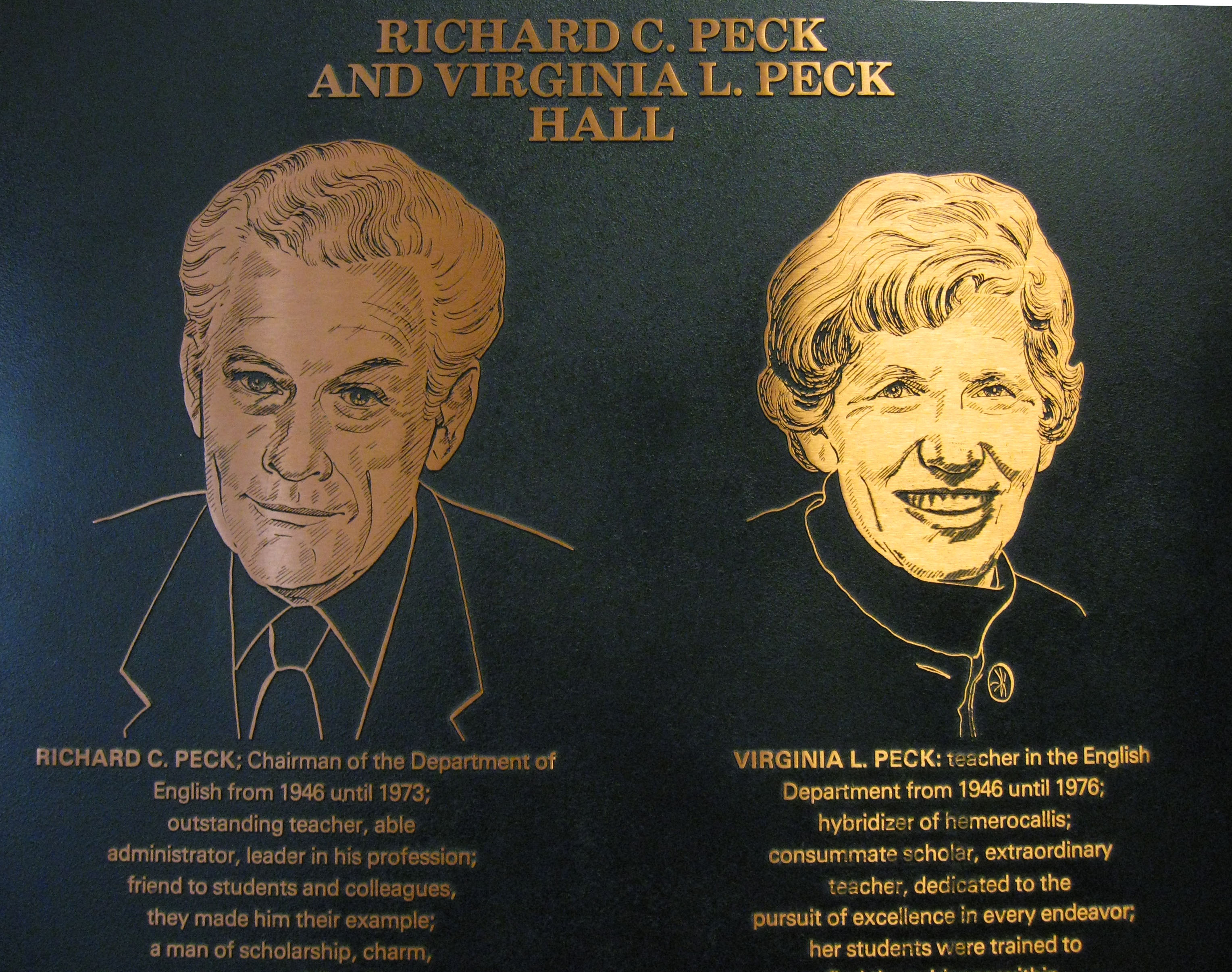 Plaque of the Pecks in Peck Hall first floor.

The Virginia Peck Foundation Trust Fund was established in the Fall of 1992 and is supported by the interest income from Virginia Peck's estate. The Trust Fund has sponsored a number of visiting scholars, writers, and speakers and has supported departmental conferences, journals, and student awards such as the General Education Writing Awards and the William R. Wolfe Graduate Writing Award.